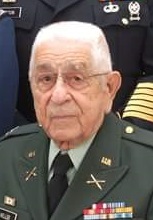 Col. Paul G. Keller, AUS Ret., age 95, of Grayslake, IL, passed away Wednesday, May 31, 2017 at Libertyville Manor in Libertyville, IL.  Born on October 2, 1921, Paul graduated from Oshkosh High School in 1940 and the University of Wisconsin-Oshkosh in 1949 with a bachelor of science degree in biology and mathematics.  He received his Masters of Science degree in 1955 at the University of Wisconsin-Madison.  On November 1, 1943, he married Jaunita Jones in the Old Post Chapel at Fort Sill, OK, and they were married 57 years, until she passed in 2001.  They had two sons and a daughter.  From 2002 to 2009, he had been a companion of Mariella Manville.  After college, Paul taught biology at Grayslake High School in Illinois, until he retired in 1983.  In addition he was varsity boys and girls tennis coach.  In high school he had served as tennis captain during his senior year and was undefeated all season, winning the conference singles championship.  In college he was tennis captain 1947-1949, was undefeated in conference competition, and won the state championship all four years.  He was the first tennis player to be inducted into the University of Wisconsin-Oshkosh Athletic Hall of Fame.  He served as a teaching professional for over 25 years.  Paul was called into military service in July of 1942, graduating from OCS as a Second Lieutenant Field Artillery at Fort Sill, OK on May 6, 1943.  He served four years in the U.S. and China-Burma-India Theater during World War II.  Upon discharge he remained in the Active Reserve, was recalled to duty during the Korean War, 1951-1952, and served in Korea.  He was retired as a Colonel after 37 years of active duty and Active Reserve and was awarded the Distinguished Service Medal.  Paul was a member of St. Andrew Episcopal Church, Grayslake, IL and Trinity Lutheran Church in Ingleside.  Survivors include his wife, Gretchen Gae Keller; his children, William Keller, Chloride, AZ, David Keller, Londonderry, NH, and Diana Barron of Grayslake, IL; and his grandchildren and great-grandchildren.  Friends of the family may visit from 4:00 p.m. until 8:00 p.m. on Monday, June 5, 2017 at Strang Funeral Chapel & Crematorium, 410 East Belvidere Road, Grayslake, IL 60030. A funeral service is scheduled for Tuesday, June 6, 2017 at Strang Funeral Chapel at 10:00 a.m. Interment will follow at 2:30 p.m. at Abraham Lincoln National Cemetery, 20953 West Hoff Road, Elwood, IL.   For information, please call 847-223-8122 or visit www.strangfuneral.org.