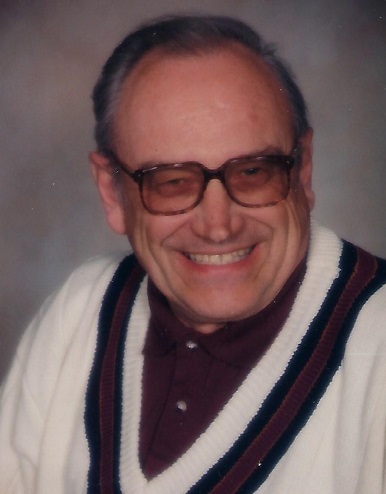 John H. “Jack” Idstein, 91, a resident of Lindenhurst and formerly of Grayslake, passed away Friday, August 16, 2019 at the Village of Victory Lakes in Lindenhurst.  He was born November 8, 1927 in Chicago, IL to Joseph  and Anna Mae Idstein.  He was a member of St. Gilbert Catholic Church.  Jack met his wife, Mary, at a local Young Peoples Club, where they both started their love for skits, etc.  After moving to Grayslake in 1953, Jack sang in the Choir at St. Gilberts for over 50 years and was very active with the Knights of Columbus. Jack served in the United States Army.  He began his career as a postal worker, then owned a Sinclair gas service station in Chicago with two of his brothers, and in 1963 he began his career with Frank G. Hough/International Harvester in Libertyville, where he retired from as a general foreman—all while supporting his wife and seven kids.  He was involved with his sons in building 50 custom Lincoln log homes in the area.  More recently he enjoyed community activities at Victory Lakes. Jack participated in the Rush University Memory and Aging Project.

A visitation is scheduled for Friday, August 23, 2019 from 3:00pm until 7:00pm (wear your BIBS  😉 at Strang Funeral Chapel & Crematorium 410 E. Belvidere Rd. Grayslake, IL 60030.  The funeral mass is scheduled for Saturday, August 24, 2019 at 9:00am at St. Gilbert Catholic Church 301 E. Belvidere Rd. Grayslake, IL.  Interment will be follow at Ascension Cemetery in Libertyville, IL.  In lieu of flowers, memorial contributions may be made to Catholic Charities.   For more information please contact (847)223-8122 or log onto www.strangfuneral.org.