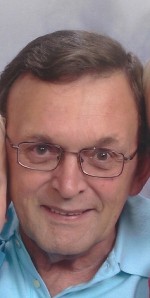 Ronald F. Frey, 70, a resident of McHenry, passed away Tuesday February 17, 2015 at Journeycare Hospice in Woodstock, IL. He was born September 11, 1944 in Chicago, IL to Wilbur and Rosemarie Frey. Ronald was a Vietnam Veteran having served with the US Air Force and was a member of Warriors Watch. He enjoyed hunting and fishing. Ronald is survived by his children Terri (Daniel) Mazurek and Ryan (Holly) Frey, his grandchildren D.J., Riley, and Tyler, and his sister Shelley (Tom) Sabel. He was preceded in death by his parents, his wife Gloria, his sister Barb, and his brother Mel. A visitation is scheduled for Saturday, February 21, 2015 from 12:00pm until 4:00 p.m. with a funeral service commencing at 4:00pm at Strang Funeral Chapel, 410 E. Belvidere Rd., Grayslake, IL 60030. Interment will be held privately. In lieu of flowers memorial donations may be made to the Cancer Federation. For more information please log onto www.strangfuneral.org or contact (847)223-8122.