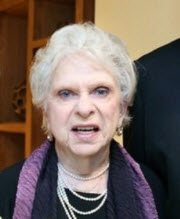 Patricia was born April 4, 1930 to John and Katherine O’Leary. She loved singing in the choir, gardening, and spending time with her large family. She was a long standing volunteer at Advocate Condell Hospital and an active member of St. Joseph’s Church in Libertyville.  When her body was strong, she also selflessly gave her time to the local shelters and soup kitchens. Her devotion and passion was family and making wonderful memories.  She enjoyed countless family vacations (Kokumfest) from all over the country including Florida, Michigan, Lake of the Ozarks, Disney, Lake Geneva, and Myrtle Beach. You could hardly ever find her without licorice, caramels, gummies, or a bear claw near by.  Pat was the true definition of a fighter as she bravely and courageously fought cancer for over 27 years.  She was a wonderful and beautiful person who will be missed by many.

She is preceded in death by her parents, sister Peggy (Hiram) Hanson, sister Jaqueline Graf,  brother Jack (Kathleen) O’Leary, and daughter-in-law Janet Kokum.  A memorial visitation and mass is scheduled for Friday, October 28, 2016 from 9:30am until 11:00am with a mass commencing at 11:00am at St. Joseph Catholic Church 121 E. Maple Ave. Libertyville, IL 60048.  Interment will be private.  In lieu of flowers donations may be made to Mundelein Seminary 1000 E. Maple Ave. Mundelein, IL 60060.  For  more information please contact (847)223-8122 or log onto www.strangfuneral.org.