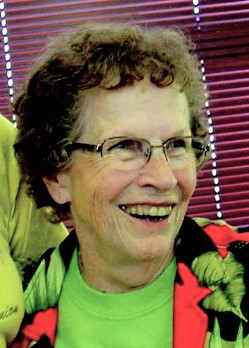 Henrietta Patricia Janzen, 85, of Round Lake passed away peacefully on April 18, 2018 following a fall in her home. She is now with the angels.  Henrietta was a wife, mother, grandma, great grandma, sister, aunt, godmother and true friend to many. Although she wasn’t very tall, she had a big heart and a positive happy essence. Henrietta was a collector of clowns and loved a good cribbage game. She was a parishioner at St. Joseph’s Parish in Round Lake and an avid Rosary maker. Henrietta was born on July 7th, 1932 in Menominee, Michigan to Maximillian “Mike” Paque and Augusta (Lyman), who preceded her in death. She graduated from Menominee High School and earned a degree in Library Science from Ferris State University. She retired after working for many years as a school librarian with Lake Michigan Catholic Schools in St. Joseph, Michigan. She is survived by her spouse Cornelius Janzen, she was preceded in death by her first husband Douglas Zyskowski of Marquette, Michigan. Henrietta and Doug are also survived by daughters Cheryl Carlson (Jay) and Christine Robbins (Kevin) as well as one son Michael “Mike” Zyskowski (Mary Shearer). In addition, Henrietta had three wonderful grandchildren, Brad, Heather and Joshua as well as one great grandchild Levi. One of 10 children of Mike and Augusta Paque, Henrietta is survived by two sisters Mary Ann Milam and Judy Kramer as well as numerous nieces and nephews. Brothers and sisters preceding her were Henry Paque (her twin), Clarice Bronald, Doris Bergfors, Jane Rapaelian, Arnold Paque, Ralph Paque, Francis Paque. Visitation will take place Sunday April 22, from 4-7 p.m. at the Strang Funeral Chapel & Crematorium, Ltd. A mass of Christian burial will take place at 9:30 a.m. on Monday, April 23, 2018 at St. Joseph’s Parish in Round Lake.