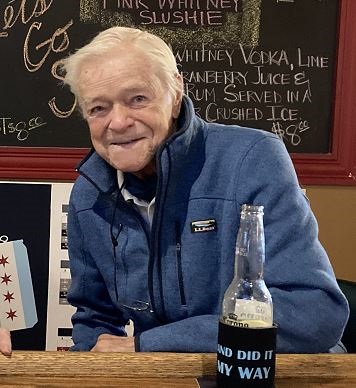 Gerald R. (Jerry) Winters, 91, a resident of Grayslake, IL, passed peacefully into eternity with his Lord and Savior, Jesus Christ, on Tuesday, November 23, 2021. In the presence of family, he took his last breath under the compassionate care at Advocate Condell Medical Center in Libertyville, IL. Born in Chicago, IL to Rudy and Madge Winters on March 18, 1930, Jerry became a native of Grayslake at an early age. He graduated from Grayslake Community High School in 1948 and took pride in his football accomplishments. After graduation, he joined the US Marine Corps where his life-long motto became “Semper Fi”. Upon leaving the Marines in 1950, he married his high school sweetheart Marion “Connie” Conway and together they raised five children. Gerald was a career “phone man” working for the Bell Telephone Company from 1952 until 1990 when he retired. While there he advanced his position, but his fondest memories were of “digging holes and planting poles”. He was active in the Grayslake community serving on the Grayslake Fire Department as a volunteer firefighter from 1960 to 1980 when he was an Assistant Chief. In 1981, Jerry married Marcia Culton and they later moved to South Ponte Vedra Beach, FL where he served as Captain of the South Ponte Vedra Beach Fire Department. In 2009, after losing his loving wife to cancer, Jerry returned to Grayslake. There he devoted himself to family time, improving and maintaining a pristine yard, and connecting daily with friends at “the corner of health and happiness” at Emil’s Tavern. Jerry is survived by his children Jerri (Tim) Ryan, Terri (Rich) Borst, Griff (Nano Engdahl) Winters, Glenn Winters, and Guy (Pam) Winters, his grandchildren Erin Borst, Lauren (Jose Luis Huertas) Borst, Blake Winters, Gage Winters, Kaitlyn Winters, Makenzie Winters, and Jack Winters, his brother Mark (Helen) Winters of Paso Robles, CA and his loving companion Sue Domain.  He was preceded in death by his parents, his wife Marcia Winters, and his sister Bonnie Rockenbach.  A celebration of life will be held at a later date. In lieu of flowers, memorials may be made to the Grayslake Fire Department. All funeral arrangements were entrusted to Strang Funeral Chapel & Crematorium, 410 E. Belvidere Rd. Grayslake, IL. For information, call 847-223-8122 or visit www.strangfuneral.org.