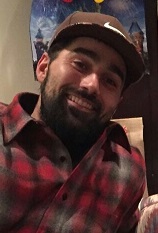 Charlie was born at Lake Forest Hospital and died in Round Lake Beach, IL. He was a character for sure, a fun-loving guy with a quick wit who was always fun to be around. He knew how too live for the moment. Charlie worked as a landscaper and more recently doing roofing. He was an outdoorsman, enjoying archery, canoeing, hiking, and working with his hands. He was a big bear of a man who was tough as nails, riding his bike all around Lake County regardless of the weather. Charlie could be very sensitive to others and was always willing to help a friend in a pinch. He was Brother Charlie, or Chuck, or Daryl.

Charlie is preceded in death by his grandparents: John and Mary Lorang, Vincent Plescia, and Jack and Anne Brinkerhoff. He will be sorely missed by his parents Perry and Julia Plescia, Grandma Lucille Plescia, brothers, John, Pete, and Michael, sisters Mariko, Jenny, and Ya Jing, along with their significant others, and many close aunts, uncles, cousins, nieces and nephews. As well as his faithful dog Khama who put in many miles at his side.

Private family services will be held Saturday in Libertyville, IL.