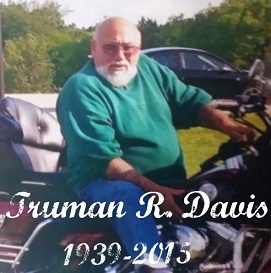 Truman Rae Davis 75 years old of Round Lake Beach, IL passed away unexpectantly at his home on July 18, 2015. Truman joined the United States Airforce in 1956 and served four years as a Sr. Lineman. He was born in Kincaid, Illinois the son of late Alphonse Boulanger and Dimple Jean. He was raised by his late grandparents Arvel and Mona Davis. On December 30, 1961 Truman married the love of his life his late wife Judith (Korpella) Davis they raised their family in Round Lake Beach. Truman spent his career as a Printer for Chicago Graphic Arts and had a passion for riding Harley Davidson’s with his late wife Judy.