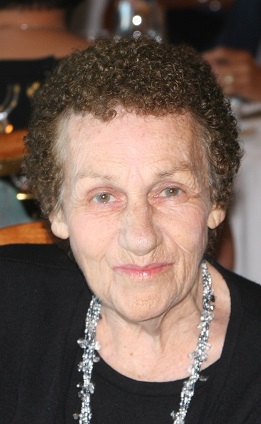 Rose Bellefeuille passed peacefully at home on Friday, January 25, 2019.  She was born on February 17, 1939 to James and Lillian Davis in Fisk, MO.  Rose spent her life serving other as a daughter, sister, mother, and waitress.  Being the eldest of four children (Rose, John, Norma and Greg) during her father’s Naval Career, she worked as a young teenager to help support her family as they traveled the world to places such as Italy.  While in California she even made waffles for the stars to earn the money to buy furniture for her family’s new home.  Arriving finally to North Chicago she met the love of her life Michael “Corky” or “Iron Mike” Bellefeuille.  Together Rose and Mike settled into their homes in Waukegan and finally Grayslake where she lived since 1972.  They had two children, Steve and Sheryl, to whom Rose was a devoted mother. Rose worked as a waitress in places such as Ted’s Log Cabin and the Ramada Waukegan to make sure her family had the extras in life.  When Didier Farms opened in Buffalo Grove, Rose became a favored Farm Stand Employee who made sure their tomatoes were perfectly displayed.  Rose had many interests in life but she loved card games and going on Casino bus trips.  Many nights over the years she played card games into the night with her family or her “second daughter” Mary Jwina Van Brackel.  In her later years she went on and looked forward to her trips to the casino with her friends on the “bus” or her long time neighbor, Mary Cooney. Rose during the last few years of her life fought a tough battle with dementia.  She was supported in her battle by her daughter Sheryl and son-in-law Scott Pierce, her two granddaughters Courtney and Madison.  The battle was eased by her close neighbor and pal Mary Garcia and family who checked on Rose daily.  Her niece Susan Hopkins called daily to discuss life and memories to comfort Rose.  Jennifer Anderson provided caregiving relief to the family three days a week and spent many long hours with Rose as she walked through the garden of dementia.  Many healthcare team members stepped in also to help and are deeply appreciated. Rose was preceded in death by many she loved dearly: husband, Michael;  son Steve; mother Lillian; father James; brother John; brother-in-law Teddy; and sisters-in-law Carol and Theresa. She is survived by her daughter Sheryl (Scott) Pierce; granddaughters Courtney (fiance Michael Goldberg) and Madison Pierce; brother Greg Davis; sister Norma Davis; brother-in-law George Bellefeuille; sister-in-law Pat Bellefeuille; and many loved nieces and nephews.  She also had many favorite dogs over the years: Coco, Josh, Lucy, Noodle and Lola.  A visitation and funeral service are scheduled for Saturday, February 2, 2019 from 9:30 a.m. until 10:30 a.m. with the funeral service commencing at 10:30 a.m. at Strang Funeral Chapel & Crematorium, 410 E. Belvidere Road, Grayslake, IL 60030.  Interment will follow at Ascension Cemetery. Donations in her memory may be made to Journey Care Hospice and Family Service of Lake County.  For information, call 847-223-8122 or visit www.strangfuneral.org.