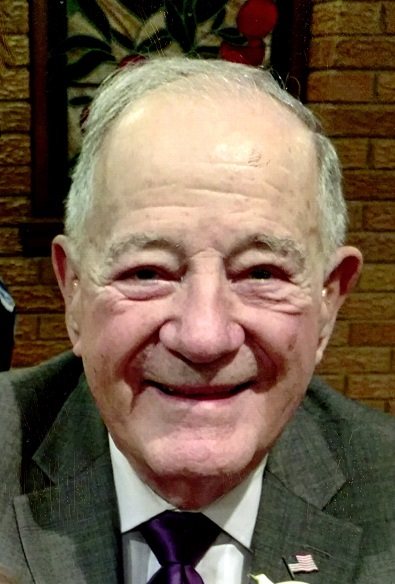 Richard “Dick” Otto Mitchell, 94, a resident of Grayslake, IL, passed away Sunday, November 8, 2020 at his home.  He was born in Chicago on December 30, 1925.  He was graduated from Nixon Elementary School in 1940 and from Kelvin Park High School in 1944.  He enlisted in the Army Air Force on December 14, 1943; flew 35 combat missions to the Empire of Japan on a B-29 crew from Tinian Island.  He was awarded the air medal with four oak leaves, the Distinguished Flying Cross, the Good Conduct Medal, and the Pacific Theater Ribbon.  He was honorably discharged on October 19, 1945.  In 2010 he was privileged to on go on an Honor Flight.  He graduated from Luther College in Decorah, Iowa with a BA degree on May 30, 1949.  He graduated from Loyola University School of Social Work with a Master’s Degree on June 10, 1953 in Chicago.  He married Priscilla Nelson on June 5, 1953 at the Norwegian Lutheran Children’s Home (NLCH) at 6000 N. Canfield Ave. in Chicago which is now known as Park Ridge, Illinois.  His professional work history includes being promoted from caseworker to superintendent of the NLCH (Edison Park Home) from April 2, 1951 to October 27, 1958.  He worked at the VA hospital “Downey” (North Chicago VA) from January 1, 1959 to July 27, 1962 where he was promoted from caseworker to supervisor.  He then worked at the Psychiatric Institute Circuit Court from August 1, 1962 to August 31, 1967 where he was the Assistant Director of Social Work Service. He served as the Executive Director of the Family Service Agency of North Lake County from September 1, 1967 to December 31, 1990 when he retired.  His community involvement included serving on Kiwanis Club in Park Ridge from 1951 to 1958.  He was a member of the Exchange Club of Waukegan, IL from 1967 to 1990 for which he was a past president.  He served on the board of the Lake County Family YMCA and on the membership committee in 1997.  He is the past president of the AARP Grayslake Chapter from 1990 to 1995.  He served in Special Touch Ministries Inc. from 1985 to 2005 during which he also served on the board.  From 2000 to death he served as the treasurer for the Special Hearts Lake County Chapter.  This church involvement has included being a past superintendent of Sunday school for Trinity Lutheran Church in Ingleside, IL and a charter member of Shepherd of the Lakes church in Grayslake, IL.  He served as an elder in the Wildwood Presbyterian Church in Wildwood, Calvary Temple A/G in Waukegan and Living Waters A/G church in Grayslake, IL.  Dick is survived by his wife of 67 years, Priscilla Mitchell, his children David (Yvonne) Mitchell of Chickamauga, GA, Daniel (Barb) Mitchell of Long Grove, IL, Mark (Sopheap) Mitchell of Morris, IL and Mary (Scott) Campbell of Madison, AL, his 10 grandchildren, and his 7 great-grandchildren.  He was preceded in death by his sisters Elsie Sotira and Marion Turek. Due to Covid-19 concerns, memorial services will take place at a later date.  All funeral arrangements are being held privately and entrusted to Strang Funeral Chapel & Crematorium 410 E. Belvidere Rd. Grayslake, IL 60030.  Interment will be held at Highland Memorial Park Cemetery in Libertyville, IL.  In lieu of flowers, memorials may be made to Every Home for Christ World Literature Crusade PO Box 64000 Colorado Springs, CO 80962-9913.  For more information please contact (847)223-8122 or log onto www.strangfuneral.org.