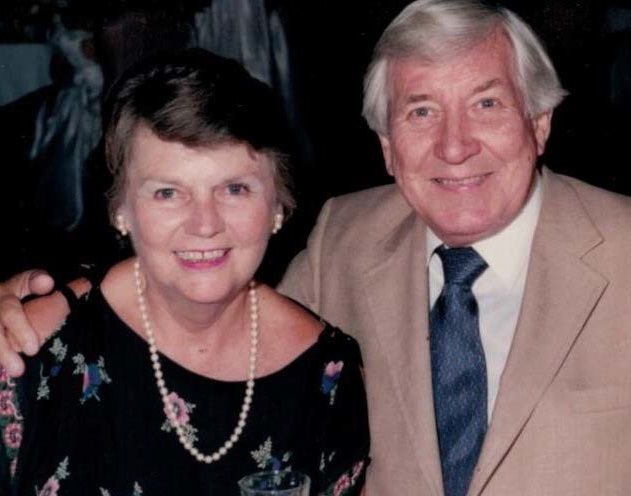 Marian Louise Nelson Hauschild left this Earth to be with her Lord and Savior on Monday January 16, 2017. She passed peacefully in the home she loved in Grayslake, Il and in the presence of family members that love and helped care for her. She died, at 92 years of age, of natural causes complicated by a stroke suffered in 2007.

Marian Louise Nelson was born to parents Selma and August Nelson in Chicago, a city that she loved all of her life. She met her husband Edward Arthur Hauschild after the end of WWII and they were married on Dec. 7, 1946. They lived and raised a family on Chicago’s North Side until 1960, when the family moved to Highland Park, Ill. Marian made sure that her children, grandchildren and friends were all exposed to the endless museums, parks and activities the City and surrounding area had to offer.

Independent and intelligent, Marian had a career in real estate while living in Highland Park, Ill from 1970 to 1986 and later in Ashland, OR from 1987 to 2000. Having grown up in a family of contactors, she oversaw the planning and construction of her home in Ashland during the 1980’s and fifteen years later in Grayslake, Ill. She was always an active and compassionate member of her local churches and community. Fond memories and fast friends were forged while a parishioner at Church of the Atonement (Chicago), Trinity Episcopal Church (Highland Park), Trinity Episcopal Church (Ashland) and Lady of Our Annunciation (Gurnee). While interested in the well-being of those around her, she also had the curiosity and desire to learn about other cultures, and her own heritage, or ‘roots’. Trips were made with her husband Ed to Sweden, various Northern European countries, Jamaica and Mexico. After Ed’s passing in 1988, Marian continued with trips to England, Hawaii and even the Oregon mountains for cross country ski excursions! She loved to be ‘on the move’ and was always walking, swimming or taking water aerobics classes. She attended Adult Education classes, joined books clubs and was always open to another way to keep her mind active and her horizons broad!

Deeply devoted to her family and friends, she is now in the loving arms of all those who have passed before her including her mother & father, husband Edward, son Ed Jr, brother Richard, aunts, uncles, cousins, in-laws and more.  Deeply missed by all those left behind, Marian is survived by her older brother Ervin Nelson of Port Townsend, WA; sister-in-law Roberta Nelson of Des Plaines, Il; son John Nelson Hauschild and his wife Brooks of Ashland, OR; daughter Lynn Christine Clore of Kaneohe, HI and daughter Louise Marian Koopmann of Gurnee, Il; grandsons Gust and Lucas (nee John); grandchildren Tyrone, Isaac, Becket, Summer, Sirena, Earnest, Lani, Victor, Micah, and Kealii (nee Lynn); grandson Kai & his fiance’ Jenny and granddaughter Kristina (nee Louise); plus 11 great-grandchildren! Marian’s presence will also be missed by her cousins Fred Nast and Arnie & Doris Lund, myriad nieces, nephews and their families.

All friends and family are invited to attend a memorial service on Saturday Feb. 11, 2017 at 11 am  Lady of Our Annunciation Episcopal Church 5775 Sterns School Road Gurnee, IL 60031. A gathering to celebrate and remember Marian’s life will take place after the service at her home in nearby in Grayslake, IL.