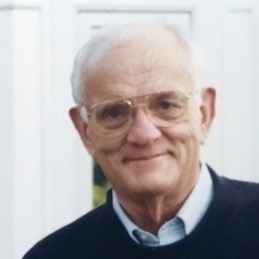 He was born in Brookline, MA, grew up in Urbana, IL and spent the greater part of his adult life in Columbus, OH, where he worked both as a practicing architect and as a well-loved Full Professor of Architecture at the Ohio State University.  He attended DePauw University and was a graduate of the University of Illinois with a Master’s Degree in Architectural Engineering.  He was a professional member of AIA.

He served with the US Navy in World War II with the Third Fleet aboard the USS Nashville and the USS Phoenix in the South Pacific.

He loved spending time with his extended family and friends at his lifelong summer home in Douglas, MI.  He volunteered there with Saugatuck-Douglas Historical Society to record and preserve the history of the Michigan Cottage.  He also generously donated his time and skills to Trinity Episcopal Church, Columbus and to St. Lawrence Episcopal Church, Libertyville as they restored and remodeled their facilities.

He was a Diehard Cubs fan, always hopefully waiting for “next year.”

His wife of 69 years, Jean Flanigan Clark, predeceased him in 2013.

Services will be held Saturday, July 2 at St. Lawrence Episcopal Church. Libertyville, IL.  Visitation is at 10 AM and services at 11, with interment following in the church columbarium.

In lieu of flowers, donations are welcomed in his name at either St. Lawrence Episcopal Church, Libertyville IL or at the Saugatuck-Douglas Historical Society, Saugatuck MI.