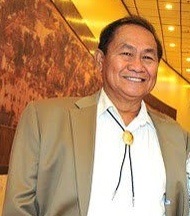 Aurelio Nayal de Guzman “ADEG”, 67, of Round Lake, IL entered the Kingdom of Heaven on Sunday, March 23, 2014. He was born in Cotabato City, Philippines. Aurelio attended Notre Dame University for his Bachelor of Arts in English, Bachelor of Science in Education, Bachelor of Science in Banking and Finance and a Bachelor of Science in Accounting. Aurelio continued his studies to receive a Master of Arts Degree in Economics. He was married to Alicia Saldua Barillo, on April 22, 1972, for 42 years. Aurelio was an accomplished man, most notable for his position as a Manager and Assistant Vice President of the Philippine National Bank. Aurelio was President of The Dipolog City Bankers Club, the President of the Rotary Club of Dipolog, the Governor’s Group Representative of the Rotary Club and the Director of the PNB Western Manager’s Association. Aurelio was survived by his wife Alice “Boss” de Guzman; his four children: Aileen, Avon Aurel, Alma Farrah and Althea Avice; his six grandchildren: Aubrey Pearl, Adam Kurt, Adrian Maurel, Arabella Elyse, Angelica Elle, Angelo Clyde and his two dogs: Hershey and Akira. A 3-day visitation will be held at Strang Funeral Chapel & Crematorium 410 E. Belvidere Rd. Grayslake, IL from Wednesday March 26 to Friday March 28 from 5:00pm until 9:00pm nightly, and a Funeral Mass will be held on Saturday, March 29 at 11:30am at St. Gilbert’s Church 301 E. Belvidere Rd. Grayslake, IL 60030. Interment will follow at Ascension Cemetery in Libertyville, IL. For further information, please call (847) 223-8122 or visit www.strangfuneral.org.