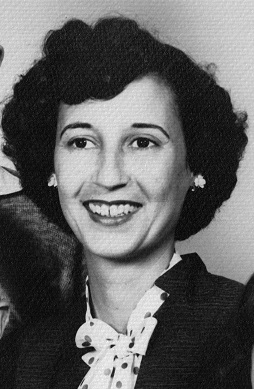 Alice Louise Camden Landrum, 90, of Grayslake, IL, died June 15, 2016.  She was preceded in death by her parents, Loren and Lizzie Camden, her husband of 62 years Alva Landrum, Jr. (“Al”), her daughter Deborah Sharon (who died shortly after birth) and her sisters Dorothy Armstrong and Betty Preston.  She is survived by her brother Leslie (Oveda), children George (Cindy), Ray (Linda), Janet (Dan Trieschmann), and Eric (Lisa); she is also survived by her eight grandchildren Alex, Douglas, Geoff (Wendy), John (Becky), Julie, David, Allison, Scott, and her great granddaughter Eleanor Alice.  Growing up on a small farm in Southern Illinois, she was able to see much of the world as a Navy wife, including a favored Naval Station in Naples, Italy.  For over 50 years in Grayslake, she was an active member of the community, including service to the Grayslake Women’s Club, Grayslake Garden Club, and Clearview Baptist Church.  She was known regionally for her artistic talent, from painting to ceramics to elaborately decorating thousands of eggs for family members, friends, and the community.  Alice enjoyed cooking for her family, including their favorites German chocolate cake (Al), fried chicken (George), lasagna (Ray), chocolate chip cookies (Janet), and T-bone steaks (Eric).  She loved the antics of her families’ cats, especially Bootsie.  The family is extremely grateful for the care Alice received from so many friends, neighbors, and health professionals.  A visitation will be held at Saturday, June 18, 2016 from 8:30am to 9:30am at Bailey Funeral Home 705 N. First St. Vienna, IL with a graveside service at 10am at Zion Cemetery in Ozark, IL.  If desired, donations can be made to the Grayslake Area Public Library 100 Library Lane Grayslake, IL 60030.